Skip to menu Skip to content
Click here or press the Escape key to leave this site now
You are here:Home|News|The Compass Centre sees significant rise in people accessing support

The Compass Centre, also known as Shetland Rape Crisis, has reported a 38% increase in people accessing its services over the past year.

The centre, which provides support for survivors of sexual violence in Shetland, released its Annual Report for 2021-22 this week. 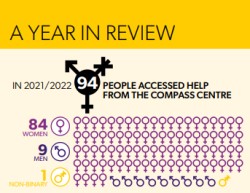 The report shows an increase from 68 people accessing its services in 2020-21 to 94 accessing help in 2021-22. In its first year, it saw 47, meaning that the most recent figures represent an 100% increase in folk seeking help over the last five years.

Service Manager, Lisa Ward, said: “These figures show that real cultural change is happening in Shetland. Sexual violence is not new and folk in our community have long suffered in silence, but with national movements such as #MeToo and corresponding local initiatives such as Rhea’s #WisToo, we are seeing more folk come forward for help and taking a stand to say that this behaviour is not acceptable and will not be tolerated.”

The centre also saw a 58% rise in people accessing its Advocacy Service, which provides support for survivors of sexual crime reporting through the criminal justice system. This mirrors statements made earlier this year by Chief Inspector Stuart Clemenson, area commander for Shetland, who noted a significant increase in reports of sexual crime to the police in Shetland.

Ward explained: “Sexual violence is any form of sexual contact that you don’t freely agree to. It is described as violence because it is a violation of your autonomy. It is common and anyone can experience it. Sexual violence doesn’t ‘just happen.’ A person perpetrates sexual violence because, at some level, they choose to do so. But there is help available, and you are not alone. 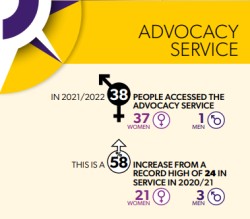 “We work closely with the police to try to make the experience of reporting less daunting for those who choose to take that route. But even with the large increase in those accessing our Advocacy Services this year, most people do not report what happened to them. Everyone’s needs are different and no-one knows how they would react after an experience of sexual violence. Respecting survivors’ choices is paramount.”

With the 16 Days of Activism Against Gender-Based Violence coming up at the end of this month, the charity is gearing up for a busy couple of weeks including the launch of a new campaign against sexual harassment and intimate image abuse, as well as partnership work with Shetland Women’s Aid to present a new play about coercive control by Stephenie Georgia. They are also currently out to recruit for new Trustees to join their Board.

Ward added: “Sexual violence is the cause and consequence of unchecked power imbalances, both societal and individual. This means that, to prevent sexual violence, we must first address unchecked power. Survivors tell us that safely sharing their stories and experiences, and knowing that they are not alone in these experiences, are important ways that we can do this, and the 16 Days is an important time of year to bring these issues to light.”